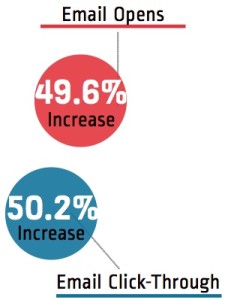 Most of us approach fundraising, particularly event fundraising, through peer-to-peer programs. It’s an accepted fact that when individuals are doing the fundraising on behalf of an organization, others are more likely to donate. In this space email still reigns as the leading communication tool for constituents engaged in fundraising.

Over the past four months, the Maryland Affiliate of Susan G. Komen for the Cure® has been preparing for their Race for the Cure in Ocean City, Maryland. Using a peer-to-peer platform event participants were regularly encouraged to send emails to friends and family in an effort to recruit new participants and move the needle closer to the event fundraising goal. After three months of efforts  the number of emails sent by participants were lagging behind year’s past and the click-through rates were no better.

While working with Komen Maryland’s Communication and Marketing Manager, I suggested we edit the event peer-to-peer site to immediately direct participants to the email center after logging into the system. Consider this, event websites allow participants to log in and immediately direct them to some sort of summary page. This is great as far as providing information, but what if we are asking participants to take an action? Why not approach this topic the way we would a website: Allow the user to reach the end result with the fewest number of clicks. If we know that we need participants to send emails to increase the number of recruited individuals and donations, then we should be placing the email center, with all canned messages, front and center.

Twenty-one days after making this change we saw a total increase of 49.6% in the number of emails sent and an increase of 50.17% in the email click-through rate. This is a substantial increase in interaction by participants, confirming that they are more likely to send emails on behalf of the organization if they initially land on the email center page.

A second change we made to the program in parallel with the email center update was the addition of two short and direct emails: one for donation solicitation and another for participant recruitment. These messages were not only short, they were clear on the call to action as well as the date of the event and the need for immediate support. This change in messaging was not only positive, but demonstrated that if we are direct with individuals they are more likely to take action.

Overall, the event was a success and the minor edits made to the peer-to-peer site greatly increased the reach and impact of participants. It’s always good to test small changes, sometimes they have a significant impact.